Though the employment market is still suffering a little setback because of the trembling economy, new jobs are being created everyday. And contrary to popular rumors, Health-Care and IT (Information Technology) are not the only career fields that offer attractive salary packages and benefits. CareerStint lists out the current top jobs in the United States. 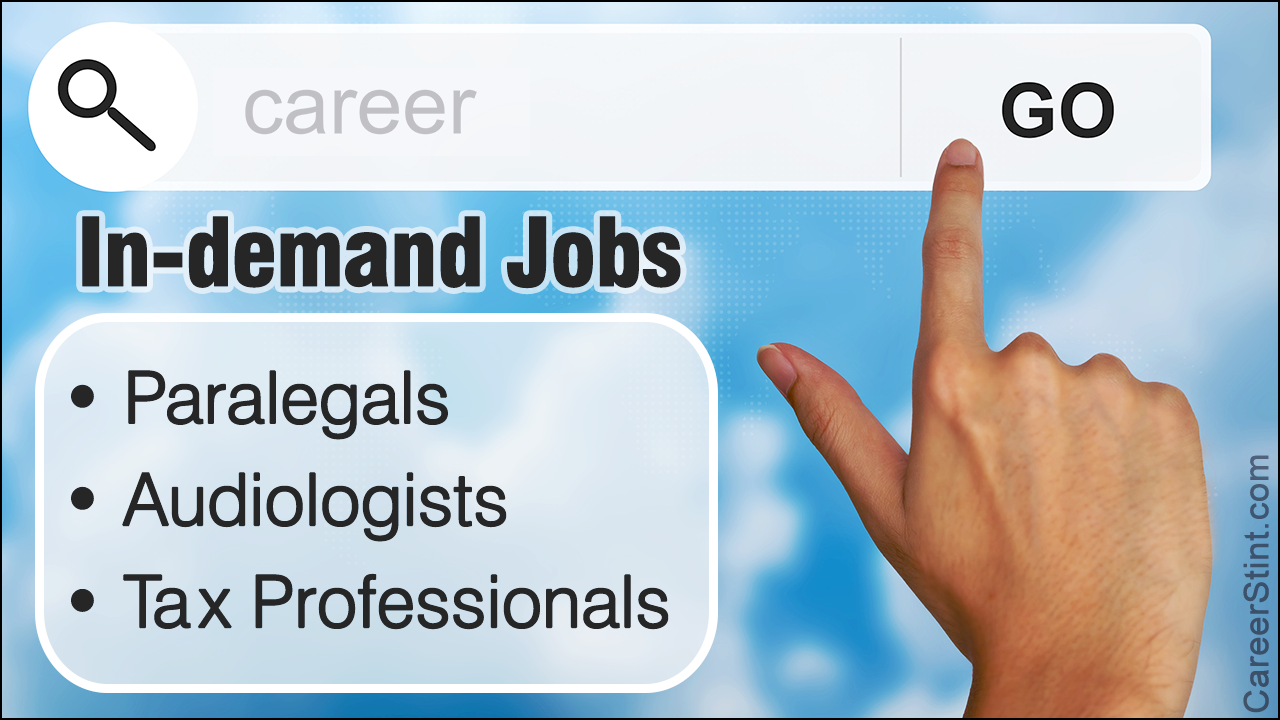 Though the employment market is still suffering a little setback because of the trembling economy, new jobs are being created everyday. And contrary to popular rumors, Health-Care and IT (Information Technology) are not the only career fields that offer attractive salary packages and benefits. CareerStint lists out the current top jobs in the United States.

In today’s time people are expected to know what is right for them from the very beginning. The employment sector has now become a battlefield and in this battle only the smart ones survive. There is an enormous amount of confusion in the minds of young adults who are just about to complete their education and don’t know which career path to choose. Today people not only concentrate on a high pay check, they want a job which offers them better future prospects, growth and security.

The recent economic downturn lead to millions losing their jobs and many companies shutting down or suffering losses which were in billions. In such a scenario, no job would feel safe. This is the main motive behind writing this article, to list out jobs that are not affected by a poor economy and work for the betterment of the future.

Big pharmaceutical companies hire thousands of Medical Science Liaisons (MSL) every year to serve as information providers for their medicinal products to various clients and doctors. There’s always a growing demand for MSLs as companies constantly come up with new medications for people. Never confuse a Medical Science Liaison with a sales representative of a pharmaceutical company. They are two different areas of work and require different expertise. It is important that a MSL should come from a scientific or medical background, most Medical Science Liaisons have a Ph.D. in Medicine Sciences. This job offers excellent future prospects, a decent pay scale starting from $75,000 and most employees are offered a 20% joining bonus.

The gaming world is booming like never before and it was among the few economic sectors which were not affected greatly by recession. People have not stopped playing video games and they will never do. There are huge, successful companies who are on a constant hunt for creative people who can use their imagination and give a new dimension to the existing gaming world. Hardcore gamers should give this field a try to consider learning game designing. It is one of the fastest growing careers which offers a decent salary of almost $30,000 to $45,000.

General Managers of Hotels and Resorts

Like every other sector even the hospitality sector faced a lot of job cuts but that dark period is over. As globalization is indeed becoming common, the need for hotel properties and General Managers who can look after them has risen considerably. The demand for good and experienced general managers for hotels and resorts have gone up because there are not many qualified people who can do this job efficiently. To serve as a General Manager of a luxurious hotel, a candidate should have a Bachelor’s or Master’s Degree in Business or Hotel Management. This is a highly responsible job as Managers preside over all the important decisions regarding the hotel. Attractive salary package is the USP of this job and experienced people can earn more than $100,000 annually.

Maintaining peace, law and order is still considered a number one priority and police officers are entrusted with this task. A cop’s primary duty is to protect the law and punish the one who is breaking it. A police officer also attends calls and helps innocent people in distress. The job of a police officer requires an applicant to have a high school or college degree. Not that this job in high demand has any less importance now but it would become more valuable in the future as the population is ever-increasing. The pay check starts from a decent $35,000 to $40,000 and gradually rises with experience.

Not all great jobs require high education. An ideal job for people who couldn’t complete their education due to various circumstances is plumbing. Many people would shy away as it is considered to be quite down market but not many know that plumbing is a recession proof career. Economy good or bad, pipes burst all the time and need replacing. People who can do a little manual labor and don’t mind dealing with water and pipes are best suited for this job. Salary usually depends on the job as ever day a new problem is expected. A plumber makes anything between $20,000 to $35,000 annually.

Audiologist are health care professionals who specialize in treating hearing disabilities. Hearing problems are most common in infants and the elderly. There is a high demand for audiologists as the number of people with hearing problems are increasing and there are not many qualified audiologists available. This low stress health care job provides a starting salary of about $52,000.

It is all about the numbers game, people who are good with numbers and are comfortable with teaching these skills to students in the academic world are in great demand. Numbers are used in every economic field and mathematicians are in demand not only in schools and universities but also in multinational companies to help them understand statistics and market share. Their pay package starts from $33,000 and gradually rises with experience.

When enlisting these jobs the IT and health-care industry still lead with the maximum number of career opportunities with attractive salaries for people. Here are some more best high demand jobs.

So these were some top jobs in demand for the future, hope this article has presented the information which was needed.