Negative Effects of Nepotism at the Workplace

Nepotism is exhibiting favoritism at work with one's friends, family, or relatives. The Workspirited article below enlists the negative effects of nepotism at the workplace.

Home / Job Market / Negative Effects of Nepotism at the Workplace 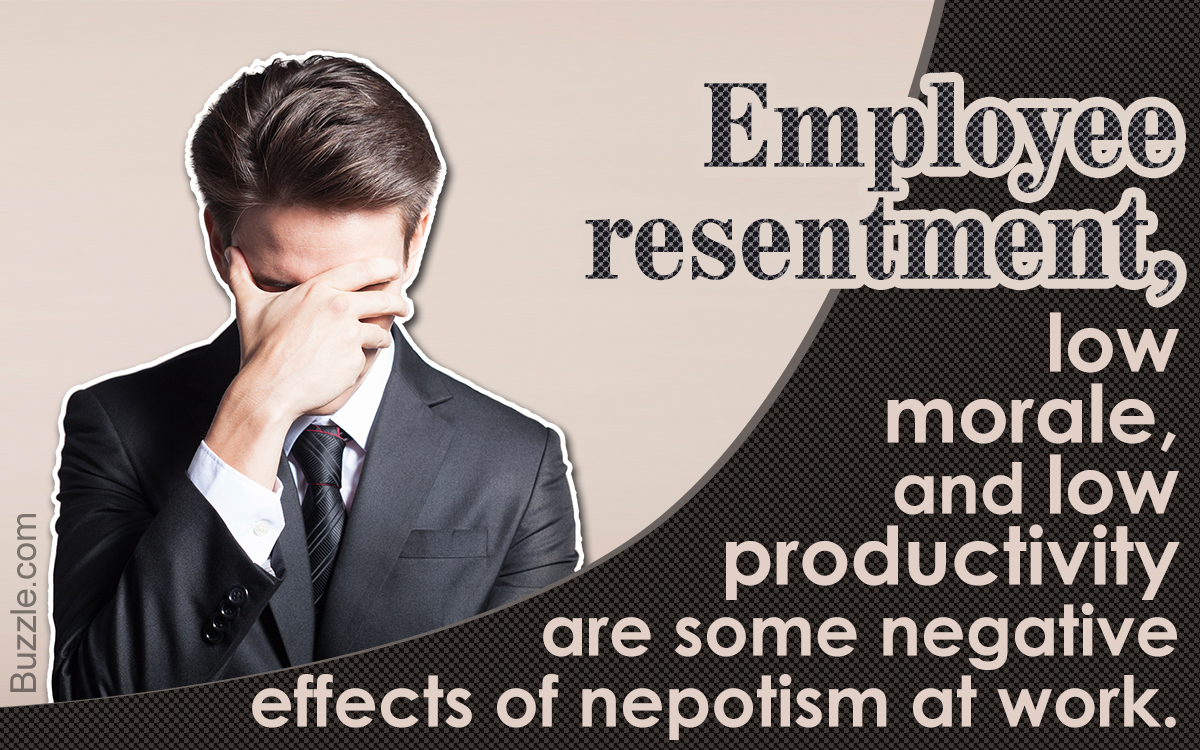 Nepotism is exhibiting favoritism at work with one’s friends, family, or relatives. The Workspirited article below enlists the negative effects of nepotism at the workplace.

Did You Know?
Nepotism is known to be fairly prevalent in government offices and politics as well. It is one of the main factors responsible for corrupt and unfair practices.

When an employer practices favoritism towards his/her family/friends at the workplace, it is termed as nepotism. Nepotism at the workplace can be one of the first signs of a deteriorating work culture. Technically, favoritism in the workplace may or may not be illegal, because an employer may favor an employee who is genuinely intelligent and capable. This kind of behavior qualifies more for an ethical debate than a legal one.

However, whatever the situation, no one should have to put up with unfair treatment at work. Nepotism issues can cause unnecessary unpleasantness and conflicts at work. In the paragraphs below, you will come across some negative effects of nepotism in a professional setting.

◆ You have been working hard towards a promotion. But, your manager grants his best friend a promotion ignoring you.

◆ One day, you turn up late to the office. Your colleague, who also happens to be your boss’s brother, also arrives at the same time. Yet, you are one who is reprimanded, and he is let away.

◆ You have put in substantial effort, ideas, and time for a project, unlike your colleague and your senior’s friend, who has merely given the project a perfunctory glance. Yet, your senior appreciates him instead of you.

◆ There is an office meeting. You voice your opinion about a few work-related issues. Another person also does the same. Yet, his opinions are given preference, because he is the manager’s son, despite the fact that both suggestions were more or less the same.

◆ Assume that you are the ad hoc leader for your team and are expected to take over once the current leader leaves. At the opportune time, another person, who is your manager’s relative, is called to take over the team, despite not being competent enough.

Employees must be aware of how to deal with nepotism at the workplace. If you feel you are capable but have been sidelined due to nepotism, you have every right to protest, communicate, and put forth your perspective. If you do not speak up, no one else will. As an employer, it is your duty to see to it that nepotism is not practiced at the workplace. Your employees deserve to be treated fairly without discrimination on any grounds.