11 Super Tips for Managers to Avoid Playing Favorites at Work 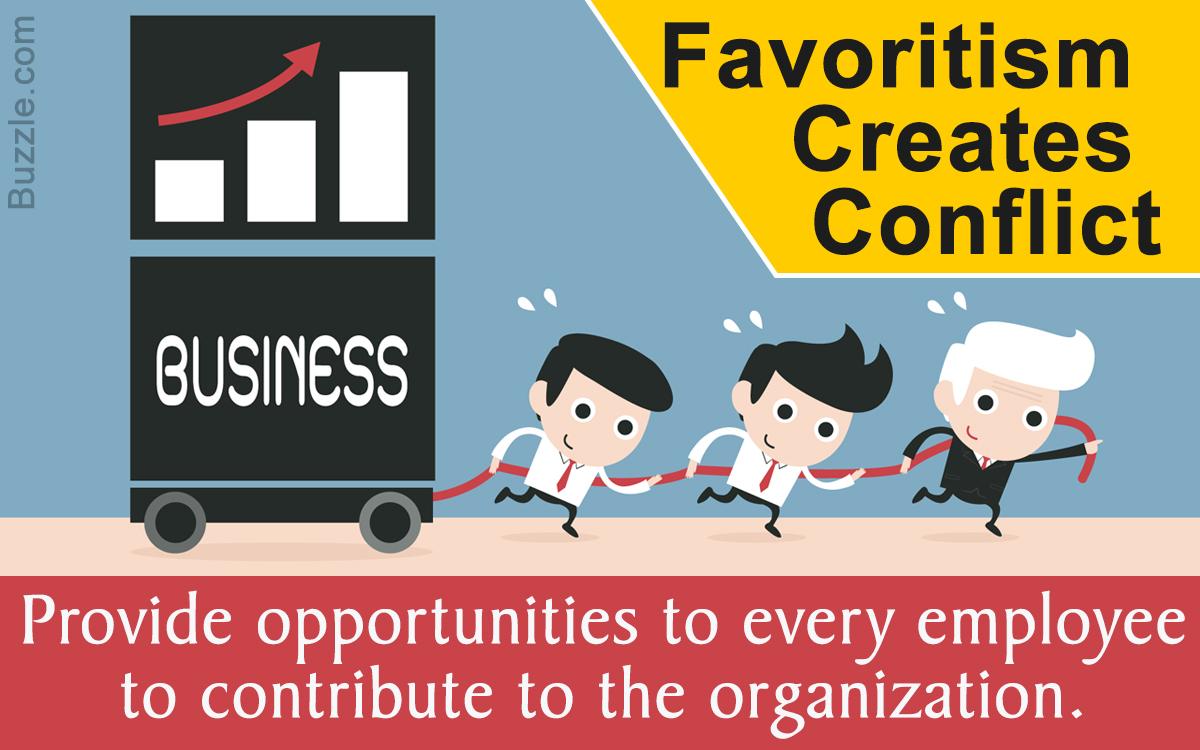 According to a survey conducted by Georgetown University’s McDonough School of Business, 92% of senior executives said that they had seen favoritism play a role in employee promotions, and 56% said they had made up their mind about whom to promote, prior to holding any deliberations.

Management schools emphasize that it is the manager’s responsibility to treat everyone equally. Commendable theory, but the ground reality is, that managers, like everyone are human. It is human tendency to foster relationships with people with whom we are comfortable. We cannot expect to have the same level of comfort with everyone.

Although protocol doesn’t allow, but if you ask managers privately on condition of anonymity, they will tell you that they trust some employees more, and delegate important responsibilities to them, while with others, they have a difficult working relationship. Reasons can be varied, but in most cases, it is because exceptional performers are valued more. This leads to a perception among average and below average performers, that their managers are more inclined towards certain individuals. While a manager may simply be assigning important tasks to those with a good track record, the rest will feel that he has been impartial towards them. Whether favoritism is deliberate or inadvertent, it creates a negative atmosphere, leading to ambiguity and score-settling amongst employees.

✘ Assigning important tasks and assignments to the same employee/employees over and over again.

✘ Spending more time with certain employees in meetings, breaks, and after office.

✘ Overlooking the mistakes of certain employees because you get along well with them, or they have done a favor for you in the past.

✘ Offering better working schedules and breaks to certain employees, because of a perception that they contribute more to the company.

✘ Inviting only a handful of employees to your home, or to any other social event.

✘ Readily accepting the leave requests of certain employees, while denying similar requests of others.

✘ Promoting/appraising an employee on the basis of rapport that you share with him, rather than on his performance.

One may wonder whether avoiding favoritism may create a situation wherein there is no motivation to perform. After all, employees who put in extra effort, do so partly because they know that their performance will be appreciated by their managers. The dearth of rewarding exceptional employees can lead to a lethargic and laid-back attitude, devoid of the spirit of competitiveness. Management gurus around the world opine that managers should put in an effort to stop playing favorites at work, but at the same time, they should make a conscious effort to reward people on the basis of their performance. In other words, managers should value every employee on the basis of the role that he plays in the organization, while maintaining a professional relationship with everyone. There are several other ways in which managers can avoid playing favorites at work. Let us take a look at them.

Tips on Curbing Favoritism at Work

Transparency: Use team meetings to clear the air on the reasons you assign certain task to certain employees. Tell your workforce about the factors that you consider before you put somebody’s name up against an assignment. When you openly talk about your decisions, you appear less autocratic than your employees perceive you to be. For example, if you assign the task of client meetings to John frequently, outline the reasons behind your decision, such as his presentation skills, his ability to negotiate, testimonial of clients, etc. This will make things clear for your employees, and reduce the perception of workplace favoritism.

Performance: Judge your employees on the basis of certain parameters. Although every employee is different from another, everybody is expected to adhere to the basic rules and regulations of the workplace. Keep a log of absenteeism, tardiness, extra-hours worked, output achieved, and frequently share these details with the employees, so that each one of them is aware of where he stands.

Regular Reviews: The cries of favoritism grow louder when someone is promoted in an organization. To address this issue, review the performance of your employees frequently, and keep them abreast of the areas in which they need to improve. Offer advancement opportunities to those employees who have performed well consistently.

Equal Interaction: Talk to every employee who works under you. Don’t ignore those employees whose performance hasn’t been up to the mark. Adopting a hostile or passive approach with underachievers will only bolster the perception of favoritism. Take the onus of arranging coaching, training, mentoring, etc., for this set of employees. Keep in mind that at the end of the day, everyone goes through tough times, and with adequate support and encouragement, things can be turned around.

Level Playing Field: Provide an opportunity to every employee to prove himself. As a manager, it is your duty to have a level playing field for your employees. Create an atmosphere wherein everyone feels that he has a realistic chance of being promoted, or selected for a new assignment.

Confidentiality: Accusations of favoritism can also be leveled against managers who are not consciously doing it. To ensure that such scenarios don’t happen in your office, create a robust system, wherein employees can report instances of ‘perceived’ favoritism to you. Ensure that employees are able to do this confidentially, as otherwise, not many will dare to honestly express their opinion to you.

No Badmouthing: Regardless of how disappointed you are with the performance of an employee, never discuss it with other employees. There is a likelihood that the word will go out, and your credibility as a manager will be questioned. Instead, get the HR in the picture, and together chalk out an action plan for the concerned employee. Badmouthing an employee behind his back will only convince your subordinates that you value certain employees more, and even discuss confidential information with them.

Chance to Everyone: Overestimating
the capability of your best employees can have issues of its own. A selected bunch of people may feel that they are more powerful than the rest because they are ‘close’ to you. It can breed a sense of complacency and heirloom among these employees, and they can start to take things for granted. To address this issue, experiment with assigning a task to a weaker employee, and provide constant support and mentoring to him.

Openness: Talk openly about the issue of favoritism. Tell your employees clearly that you don’t intent to play favorites at work. As this issue is usually discussed in hushed-up tones, bringing it out in the open will send across a message that you are aware of the perception some people may have about you.

Body Language: They say actions speak louder than words. It is true for our body language as well. When you are interacting with your employees, ensure that you are behaving in a manner which doesn’t send out wrong signals to the rest of your staff. You may nonchalantly pat someone’s back because of a job well done, but employees who are at a distance, will only see it as an act of favoritism. Make friendly gestures with everyone, or do not make them at all.

Neutral Opinion: If you are in a fix over the issue of favoritism, and don’t know for sure if you might have inadvertently shown signs of doing it in the office, take the advice of a trustworthy individual. There are times when we get so worked up on certain things, that we see things from a different perspective. Select somebody you perceive as ‘neutral’, and encourage him to tell you if you have strayed away from the expected course.

Playing favorites at work might give you an advantage in the short-term, as you will have a group of employees who will go the extra mile for you, but in the long run, it will lead to polarization of the workplace, pitting one group of employees against another. While office politics is a hard pill to swallow for most managers, it needs to be dealt with effectively, because at the end of the day, all employees share a common responsibility of using their skills to contribute to their own and the company’s growth.