10 Most Annoying Employee Behaviors We See at the Workplace

Every workplace has employees who irk others with their strange habits. While some habits can be tolerated, others are just plain unacceptable, and ought to be done away with. Find out which employee behavior are ranked the most annoying!

Every workplace has employees who irk others with their strange habits. While some habits can be tolerated, others are just plain unacceptable, and ought to be done away with. Find out which employee behavior are ranked the most annoying! 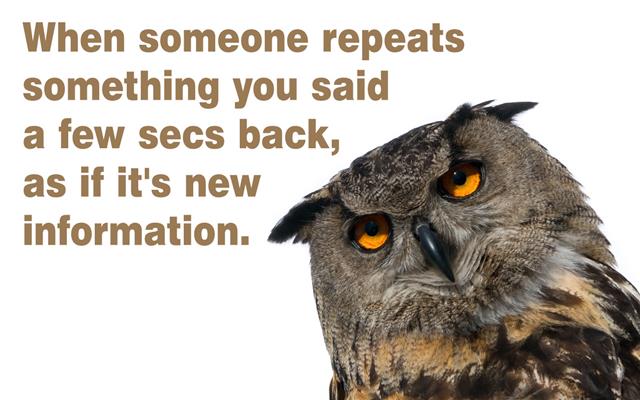 According to a survey, 57% voters thought that noisy eating was the most annoying habit to tolerate in a workplace!

While it is natural to not get along with every colleague, it is very possible to live in harmony with one another. Since it is a professional environment, priority must be given to the job at hand and not interpersonal likes and dislikes. That being said, there are some things that one must just never do while at the workplace.

Some of the most annoying employee habits are often those that are done without thinking. Little things such as laughing in a bizarre manner or talking a lot about yourself or your pet can get to people’s nerves. However, there is no telling as to what can irk or creep people out.

There is a very fine line between maintaining professionalism and going overboard with your mannerisms at office. Here is a list of 10 most annoying employee behavior that should not be encouraged.

In a competitive work environment, it takes every ounce of concentration and skill to get the job done well. It can get extremely annoying to have a colleague interrupt you for small talk, give details about a late night party, or inquire about the weather. You can tell a lot about a person’s attitude towards their job by the sincerity with which they work.

Some co-workers can’t differentiate between friendly chitchat and gossip. They will go out of their way to get the latest scoop of gossip about the other employees, and won’t even spare the boss.

Do not be surprised if some of your co-workers know how much you earn and what you did last summer!

It is expected that employees dress appropriately and groom themselves before stepping into the office. However, there are always a few who look as if they forgot to change their clothes from the previous day.

Since every office has a specific dress code, all are expected to follow the norms and come dressed in a presentable manner. It would be nice to have people tuck in their shirts properly, comb their hair once in a while, and not wear shoes that squeak or tick-tock.

Yes, we know you’re on an important call, but can you tone it down a notch please! There are some overzealous employees who forget that there are others who are trying to focus and meet deadlines as well.

While we know how important conference calls are for the clients and the organization, the ideal approach should be to use appropriate headphones and keep the noise levels low, so that others can concentrate without being distracted.

Similarly, some people have a bad habit of talking loudly while answering their personal calls, which unintentionally lets out private information. While most co-workers just don’t care to know the context of the conversation, a few will circulate the gossip even before the phone conversation is over.

Co-workers may not complain, but they hate it when someone barges into their office cubicle without permission. Even though there are no doors, the cubicle does constitute a personal working space.

Just like how we would knock on a door before entering, it would be polite to ask the co-worker for permission before entering the cubicle. There could be instances when co-workers do not wish to be interrupted because they are on a call or working on something urgent. If you think they are busy, wait a while, or come back later.

Be careful not to load your lunch with garlic, or wear smelly shoes or socks at work. While you may not think much of it, your co-workers may be trying hard to deal with the stench. Similarly, personal hygiene does really matter and must be maintained at all times.

People who smoke tend to reek of stale cigarettes not only from their clothes, but also when they speak. If you happen to shake hands with a smoker you’ll surely find your hands smelling of the stuff as well. Body odor can really put off co-workers just as much as the excessive use of cologne can paralyze their sense of smell.

One of the most infuriating things a co-worker can do is to initiate some form of physical contact that is inappropriate. Saying things that are loaded with innuendos is guaranteed to put people on their guard and make them stay away from the office creep.

Colleagues who bully and use foul or crass language and gestures are sure to find themselves in the cubicles next to the washroom, where no one ever wants to stop for a chat.

Taking Too Many Breaks

There is a certain amount of time allotted to everyone to take breaks and this rule is not flexible. Nonetheless, there are some who seem to be always on their desks doing nothing, or away on breaks answering private phone calls.

Heck, then the whole office should start taking longer breaks, idling online, or talking on their phones, if that’s the way to gain extra free time at work! The only way to stop testing people’s patience is to limit the amount of breaks you take, and take them at the appropriate time.

Nothing angers and frustrates co-workers as much as a sly colleague trying to take credit for others work and passing it off as their own. It is unethical to use someone’s hard work for one’s own gain.

Similarly, co-workers who hold more important posts in the office hierarchy often tend to extract help from other colleagues to finish their own pending work. However, when asked to help in a similar situation, these co-workers are likely to refuse, make flimsy excuses, and squeeze their way out of the situation.

Why do some colleagues insist on peeking into other people’s cubicles to find out what they are doing? Apart from being sickeningly competitive, curious, and insecure, there is no other explanation for wanting to keep a check on your colleagues and their work.

Employees who have to deal with this irksome situation must ensure that they keep their computers password-protected, so that no one can tamper with their work while they are away from their desk.

It is ironic how some co-workers seem to get away with everything, without being the least concerned. It’s as if they have been granted the license to flout rules and they can just about do anything they feel like.

They come when they feel like it and make it evident to everyone else that they are late and proud of it.

There is also a second category of latecomers who not only arrive late but turn the whole office upside down with their never-ending complaints about the traffic, dropping the kids off to school, not finding the right dress and matching shoes to wear, etc. An ideal gift for such co-workers is an alarm clock to make life easier for everyone involved.

While there are a gazillion other things that bother co-workers, some bit of leeway must be given so as to let each colleague work in peace. After all, we can’t have everything our way and we can’t change ourselves completely for someone else.