Information that is spread to promote a cause or a certain view is known as propaganda. Different types of propaganda techniques are used in advertising. This MarketingWit articles tells you about them with some examples of the same. 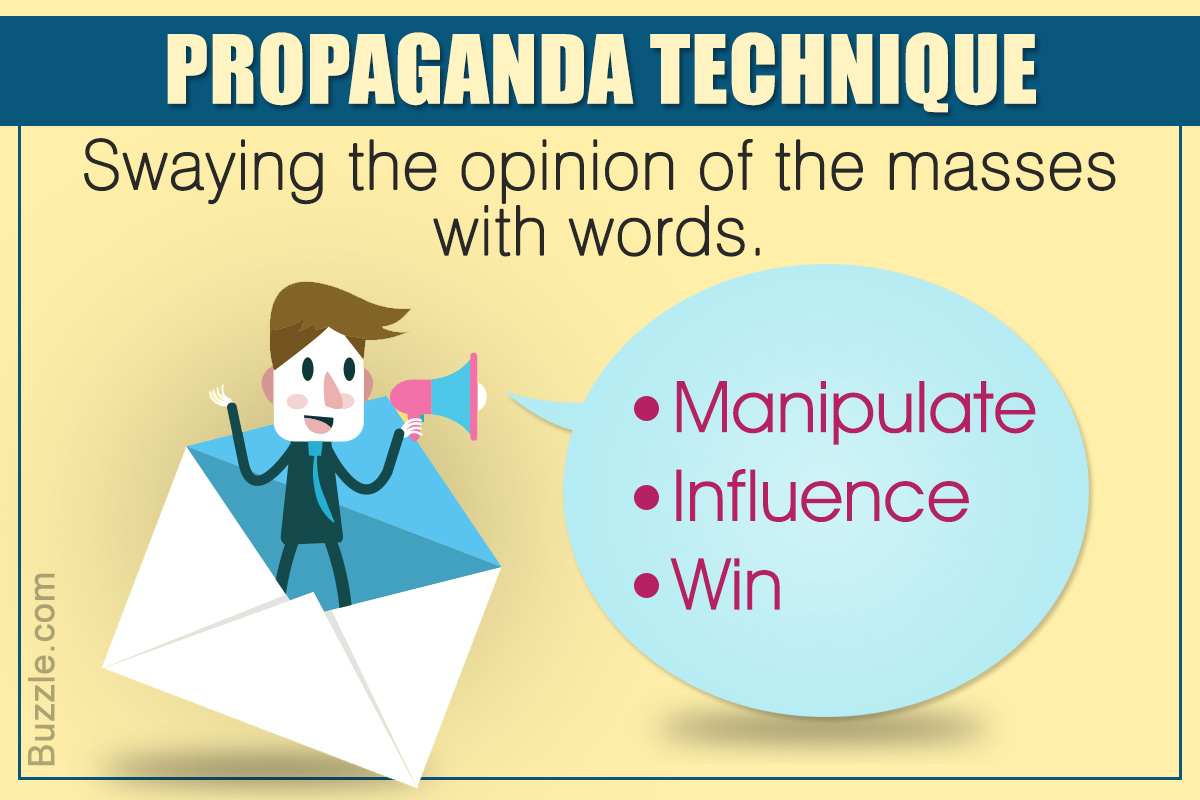 Information that is spread to promote a cause or a certain view is known as propaganda. Different types of propaganda techniques are used in advertising. This MarketingWit articles tells you about them with some examples of the same.

Propaganda is a set of the messages intended to influence opinions of the masses, not giving the opponents any opportunity to rebut the idea. Instead of telling people the truth, propaganda often aims at manipulation of ideas to influence the behavior of a large number of people. So, it presents ideas selectively. Propaganda is related to advertising, where it is about promoting a product. It is also used to influence religious beliefs of society.

During the 20th century, the term propaganda acquired a negative meaning in the western countries. It meant, a deliberate dissemination of frequently false, but ‘obligating’ justifications of certain political ideologies. The propagandist seeks to alter the way people understand an issue in favor of the interest group.

It aims at persuading people to do a certain thing because many other people are doing it. An example can be a soft drink advertisement wherein a large group of people is shown drinking the same soft drink. People feel induced to opt for that drink as it is shown to be consumed by many. Snob appeal is the reverse of bandwagon. It indicates that buying a certain product will make you stand out from the rest, as the masses won’t afford to buy it.

This propaganda technique uses words of an expert or a famous person to promote a particular idea. For example, a sportsperson is shown recommending a brand of shoes. Generally, people idealize celebrated figures. So celebrities are used to advertise certain products. A testimonial has to be reasonable. Advertisers are cautioned not to use false testimonials, as they lack authenticity.

In this technique, qualities of a well-known person are associated with a product to promote or demote it. Linking an item to a respected person is positive transfer. Creating an analogy between a disliked person and a product is negative transfer. It is also used during war times.

It is when the product name is repeated many times during an advertisement. This technique may use a jingle, which is appealing to the masses and fits in their minds.

Glittering generalities is another important technique of propaganda. Generalities are logical fallacies. They are often vague but positive ideas. An example could be, “It’s cool!” What is cool is not specified. It implies the use of appealing words giving no concrete idea of what the words are talking about.

In the ‘Plain Folks’ propaganda technique, common people are attracted on the basis of their common values. The current vernacular of the target audience is used. Scholastic speech seems artificial. So errors are made on purpose to give the feeling of spontaneity. ‘Homey’ words, as they are called, are used, so that the audience can connect to the propagandist. ‘It’s Morning in America’ is an example of the ‘Plain folks’ strategy. This technique is used with glittering generalities.

‘Quotes out of Context’ is a technique of selectively changing quotes to change meanings. It is used in political documentaries. The ‘Half truth’ technique makes use of a deceptive statement. Double meaning may be used to misinterpret a truth. ‘Card stacking’ is another propaganda technique, where information is manipulated to make a product appear better. Only the facts in favor of the propagandist are used. The advertisement of comparison between Apple Macintosh and Windows computers is an example of card stacking. The success of this technique lies in the choice of facts or cards and the way they are stacked by the propagandist.

‘Black and White fallacy’ aims at presenting only two choices to the public. At times, direct order is used whereby decision-making of the audience is simplified by telling them the steps they need to take. On the other hand, ‘Unstated assumption’ is used when the propagandist does not want to state the concept explicitly. Here the concept is repeatedly implied.

The technique of demonizing the enemy, makes the people with an opposing standpoint, appear inferior. The use of the term ‘gooks’ for NLF soldiers during the Vietnam War-era is an example of this type of propaganda. Obtaining disapproval is another technique of obtaining disfavor of an idea by signifying that it is of the ‘hated lot’ of the society.

Children are most vulnerable to different types of propaganda techniques. They cannot reason to decide whether a message is propaganda or not. They are highly fascinated by the media and influenced by the behavior of their peers. They assimilate propaganda promiscuously. Actually, most of us, at many points of time fall prey to propagandists and are tempted to do the things they suggest us to.