Neonatal nursing is an emerging career in nursing. It involves caring for very small babies. Know more about this profession. 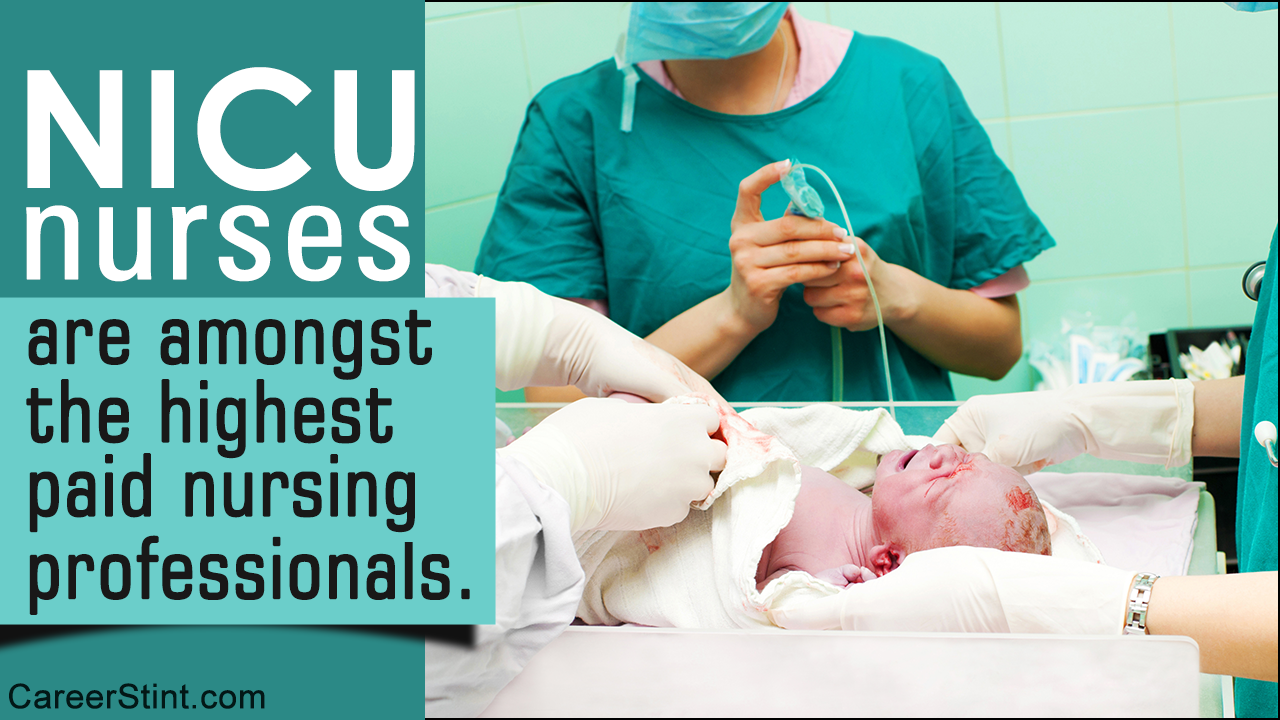 Neonatal nursing is an emerging career in nursing. It involves caring for very small babies. Know more about this profession.

Nursing is one of the most sought after careers in the health care industry. Incidentally, it is also the fastest growing field, which employs about 14 million professionals in US alone. Nursing professionals constitute about 14% of the total workforce in health care industry. Neonatal nursing is one branch of nursing which has been in demand for the past few years owing to higher rate of premature births.

Job Description of a NICU Nurse

NICU refers to Neonatal Intensive Care Unit. Babies that are below 28 days of age are called neonatal babies. NICU nurses are specially trained for caring and nursing of these little babies. Babies admitted in NICU are fragile, sometimes critically ill, hence, require constant care and attention. Some healthy babies may also be admitted in NICU to protect them from possible infections. NICU nurses look after these frail babies and nurse them back to health.

One can become a neonatal nurse after completing their nursing graduation. You can opt for a four-year Bachelor of Nursing degree course (BSN) or a two year associates degree in nursing. You become eligible to work as an RN after taking a National Council Licensure Examination (NCLEX-RN ). One must also acquire a certification in Neonatal Resuscitation and/or Neonatal Intensive Care Nursing, which enables you to work as a neonatal nurse.

NICU nurses typically work at three different levels, level 1, level 2 and level 3. Level 1 nurses deal with healthy babies in a neonatal nursery. They ensure that the baby gets fed on time and guide mothers on proper neonatal care. Their job involves keeping the baby happy and comfortable. However, the demand for level 1 neonatal nurses has gone down, since most babies now stay with their mothers. Besides, less complicated deliveries make it possible for mothers to look after their babies from day one.

On the other hand, level 2 nurses are very much in demand, as the number of premature births has gone up. Level 2 nurses care for premature and/or ill babies. In cases where a baby is expected to be born with certain medical needs, NICU nurses prepare for the arrival of such special babies. After their birth, NICU nurses provide all the support and care to the little one so that it can survive on its own. Level 3 nurses are the ones who deal with the most critically ill babies. These babies are usually born with an unforeseen medical condition that may demand an emergency care. Some babies may develop serious complications after their birth. In any case, NICU nurses are well equipped to care for such critically ill babies.

NICU nurses must be able to work in team as they have to collaborate with their colleagues, doctors and other medical staff. They must also possess certain personal skills as they act as a support system to the families of ill babies. Lastly, they must be willing to work at odd hours and must report on duty whenever need arises.

Salary of a neonatal nurse is greatly influenced upon the setting in which they work. They may work in community setting, private clinics, NICU departments of hospitals etc. NICU nurses are amongst the highest paid nursing professionals, with an average median salary of $75,000. With experience, some nurses can earn as high as $190,000 a year.

Job of a NICU nurse, though demanding is greatly satisfying. This is a great career for all nursing aspirants who are determined to give a new lease of life to ailing babies.