You’ll Want to Read These Examples of Glittering Generalities

Glittering generalities is one of the propaganda techniques to use vague words or statements that have an emotional appeal on people without giving them a concrete reason. These words generally render a positive influence on people as they link high-valued ideas. 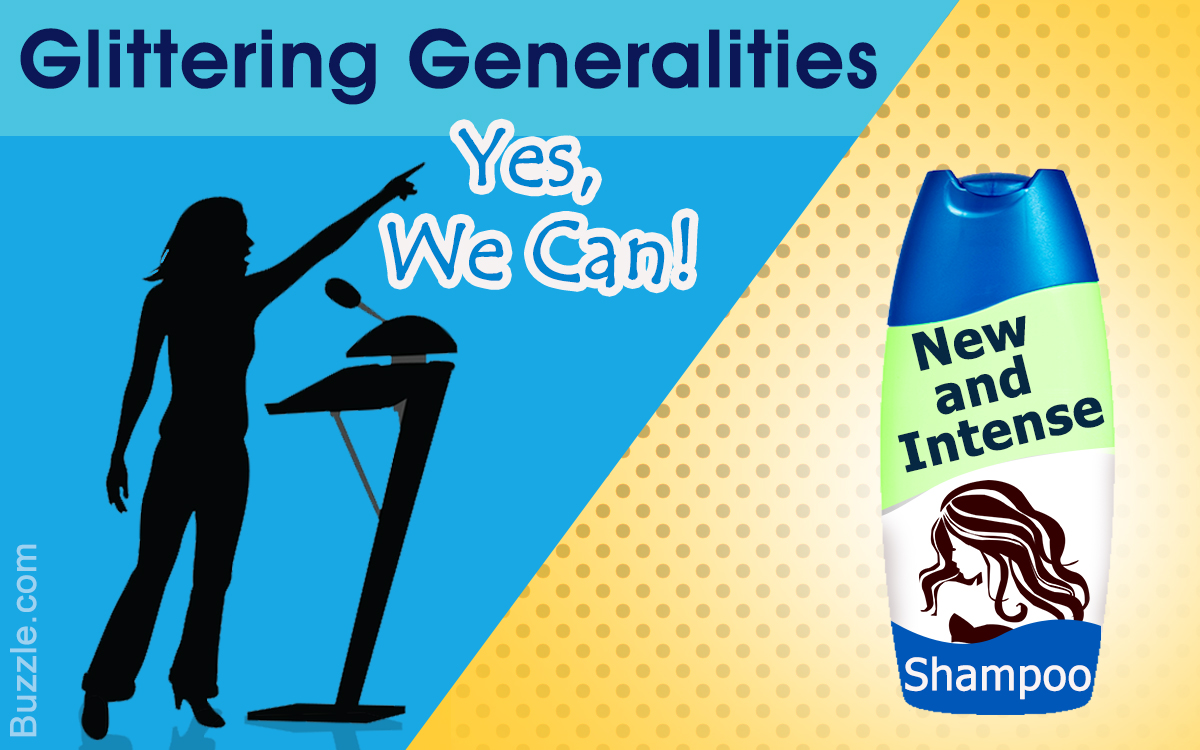 Glittering generalities is one of the propaganda techniques to use vague words or statements that have an emotional appeal on people without giving them a concrete reason. These words generally render a positive influence on people as they link high-valued ideas. 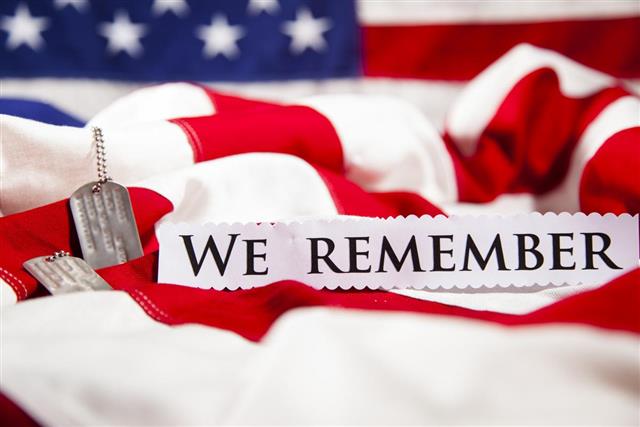 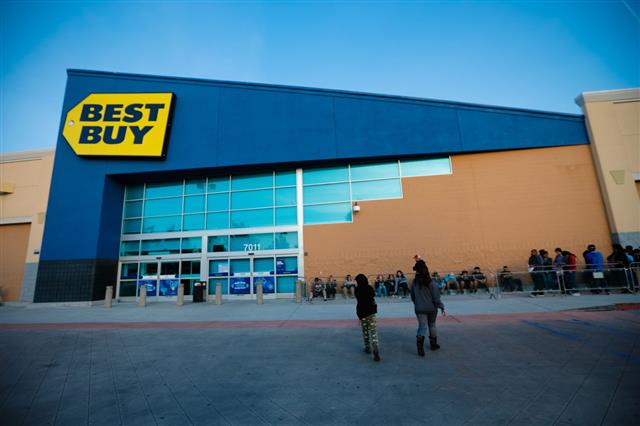 We fear that the glittering generalities of the speaker have left an impression more delightful than permanent.
― Franklin J. Dickman

Often times, when you watch an advertisement, you get attracted to the labels like ‘100% organic’, or flashy phrases like ‘gives you morning refreshment’. And every time that ad flashes on your television screen, you get this urge to buy that product as you find it effective.

Then, there are times when you casually flip through the pages of a fashion magazine and all at once find your eyes getting stuck at the latest trend mentioned there. And no matter what you do, you simply cannot look away. It is no magic that you were dragged to that product’s advertisement or trend. Companies use a number of propaganda techniques to gain the attention of readers and viewers, for a better sale. Glittering generalities is one of the propaganda techniques used majorly in political and advertisement campaigns.

What are Glittering Generalities?

✤ Glittering generalities are vague words and phrases used to attract and influence the audience but have no evidence of existence in the real sense.

✤ These words are emotionally appealing, and mostly have a positive connotation on people.

✤ Glittering generalities are words that literally sparkle (on the surface), ’cause they are successful in convincing the people, but have little or no real meaning when pondered on.

✤ Usage of such words or statements make us accept and approve them without any investigation.

✤ No wonder these words sparkle, but they only state ‘generalities’ and not the specific details.

✤ They are also known as glowing generalities or loaded words.

✤ The Institute for Propaganda Analysis defines it as ‘name calling in reverse’.

✤ These tactics are usually used by politicians and advertisers to persuade the audience to buy some
product, to support them in their cause, or to do something that everyone else is doing.

✤ Glowing words can mean different to different people, depending on their perception.

Methods to use Glittering Generalities

✤ Use figures of speech like alliteration, metaphors, and hyperbole to make your words sound lyrical.

✤ Use rhyme schemes and hypnotic patterns to get a poetic appeal.

✤ Use nouns that would trigger emotions, like patriotism, justice, etc.

✤ Glittering generalities are very commonly used in politics by politicians or elected members to convince the people to trust them and eventually elect them. They make use of same vague statements that have undoubtedly become an essential ingredient of campaigns and propaganda events. These may sound sincere, but actually have no meaning at all. A simple example would be ‘Vote for change’. Here, it is not specific what change they’re talking about. It can be positive, it can be a miserable one. But people get persuaded by it as they tend to take it positively. Another celebrated example is President Obama using glittering words like Hope, Progress, Change in their campaigns. Hope? What is it? Is it an emotional state of mind? Is it an assertion that better things are coming? Such words are used to make people feel good, but when given a thought, they are hollow.

✤ Another way of using glittering generalities by politicians is appearing to be a part of common folks to win their hearts (and support). A famous instance is, Bill Clinton eating at McDonald’s.

✤ Examples of glittering words used in politics are:

✤ Examples of glittering statements used in politics are:

● We believe in fight, fight for freedom.

● We should protect our democratic values.

● America is coming back.

In Advertisements and Commercials

✤ Usage of glittering generalities has been observed a lot in advertisements and commercials. The advertisers use slippery words and phrases to attract customers and sell their product/services. The slogans used are so attractive that the audience hardly engages in finding its true meaning. Thing about advertising is that, if you listen to something over and over again, you tend to believe it. Some marketers use glittering generalities like, ‘Buy this, and change your life’. Getting one item home is definitely not going to change your life! They make false promises that look genuine.

✤ Likewise, there are food manufacturers that claim ‘low-fat’ or ‘100% pure’ with a fancy packaging, or you might find that the slogan or packaging for some shampoo has been changed adding the shiny label ‘New and Improved’; when in real, the product might be dosed with calories, or there might be no actual improvements in the product. All these are glittering generalities that are used for marketing purposes.

✤ Some agencies or companies create slogans that boost the audience with confidence and hope, but when examined, the statements seem to be vague and meaningless. For example, you might be acquainted with Nike’s slogan―Just do it. Do what? Buy them and do workout? It solely depends on how the person perceives it.

✤ Some companies give incomplete comparisons like, ‘Better tasting’, ‘4x healthier’, etc. These loaded words definitely leave us with a positive impression, but are incompletely defined or explained. The customer won’t challenge the complete meaning behind the product’s slogan, and would end up buying it.

✤ Examples of glittering slogans and catchphrases used in commercials are:

● Gets you back to you ― Twinings

● Let your fingers do the walking. ― Yellow Pages

● Reach out and touch someone. ― AT&T

● There is no substitute. ― Porsche

● The best coffee For the best YOU ― Starbucks

✤ Glittering generalities are used by writers and authors to compel the audience to agree with them.

✤ This technique is used to develop a connection with the reader by evolving emotional appeal.

✤ Writers make use of emotional, attractive, or eye-catching pictures and visuals to keep the reader interested in the extract.

Disclaimer: All slogans, products, brand names, and company names used in this article are the property of their respective owners. The image in this article is for representational purposes only. 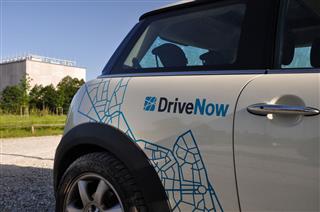 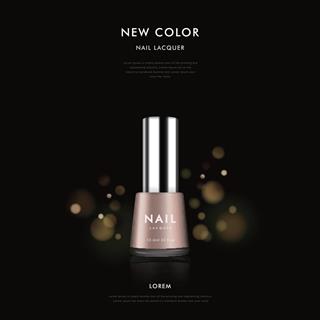