Ethical appeal is a skill of persuasion that bases itself on the credibility and trust regarding the persuader. MarketingWit elaborates on this variety of rhetorical appeal through different examples. 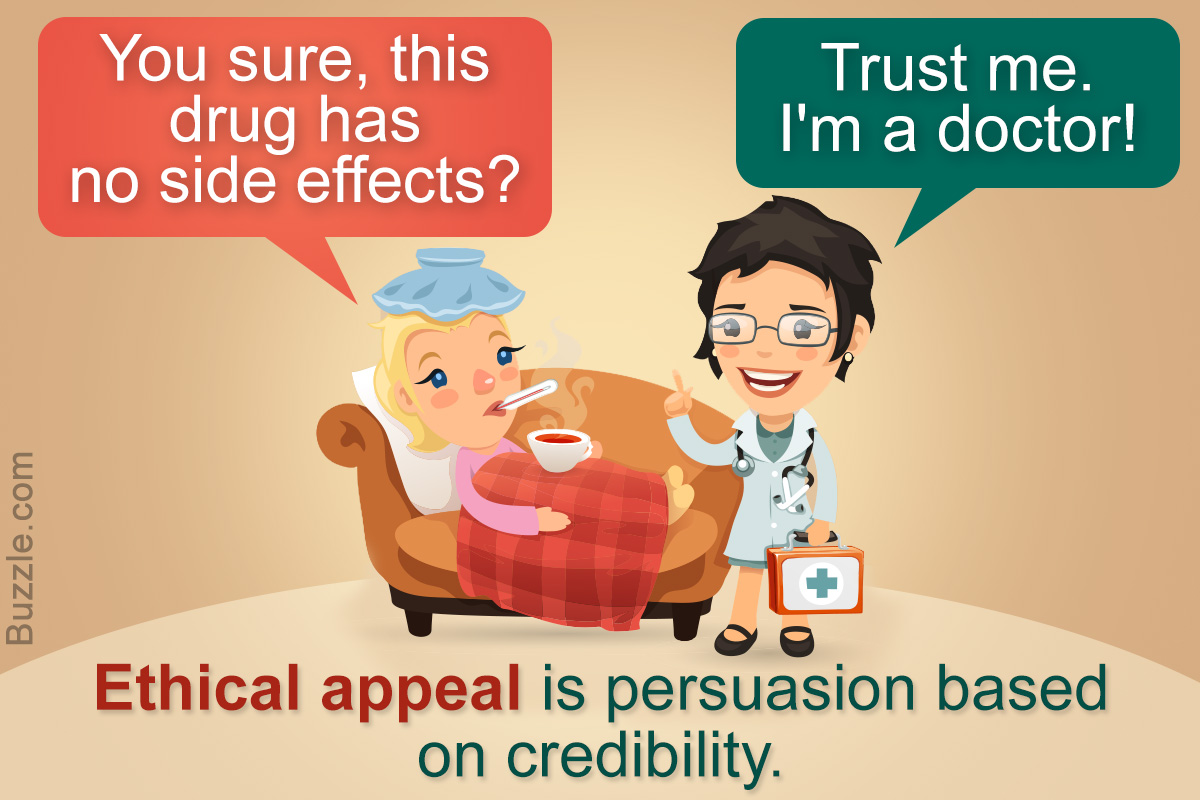 Ethical appeal is a skill of persuasion that bases itself on the credibility and trust regarding the persuader. MarketingWit elaborates on this variety of rhetorical appeal through different examples.

Dressing up as a professional, for example as a dentist in a toothpaste advertisement, is an intelligent way of creating trust among the viewers about the quality of a product. Adding the year of establishment of the business or company (for instance, since 1881) in its logo or tagline produces a sense of credence and reliability among consumers.

Appeals made like these get all our attention, leading us to buy that product or service. No harm in it either, as it is simply presenting oneself in a way so as to generate a sense of assurance in the audience. But let’s just try to find out what exactly goes into making such efficacious appeals. Ethical appeal is one of those magic tools that can manipulate our thoughts. Stemming originally from Aristotle’s concept of ‘ethos’, it is a kind of persuasion technique.

Definition
Ethical appeal is the persuasion made on the basis of the character and credibility of the persuader. It describes why someone should listen to or believe a persuader. Ethical appeal can be an appeal made by a public speaker/orator, writer, or by advertisements through various media, including print and television. The trustworthiness felt about the approaching person is the key to this thought.

Examples of Ethical Appeal
In any society, there always are some personalities that are eternally revered. Quite possible that it is the position or the profession that is respected, more than the individual holding it. These few people include judges, teachers, priests, preachers, deacons, and others. Their views and opinions are mostly believed to be the “correct opinions”. Apart from the intellectual appeal their thoughts may make, we also get influenced by the authority that they represent. Such factors that instill an impression about the authenticity of a given argument, and the person making it, explains what ethical appeal implies. Listed below are some examples of ethical appeals made as written/oral speech, published, or advertised content.

Character-based Persuasion
1. “I am prescribing this treatment for you after having dealt with hundreds of patients with similar symptoms.”

2. “I hope you will not ignore my opinion, and as a dentist, I suggest a root canal therapy in this case.”

3. “Nobody can equal her performance when it comes to perfected Axel jumps; besides, she is known for some of the most difficult free skate performances in figure skating.”

4. “I have been going behind many such suicide bombers, for years now. Have found out their secret operating cells, and have even successfully defeated their plans several times. You can easily trust me with this case.”

5. “If his service as a Marine has taught him something, it is that, caution is the best policy in a situation like this.”

Oratory
Appeals are presented well through speeches, especially by political personalities. Along with many other tactics to influence the general masses, ethical appeal serves as an effective tool as well.

6. “I need not say how we have been together in happy and sad times. My efforts towards the development of the city, combined with a career as an experienced public servant, has helped our city become home to a million happy souls. Your appreciation shows that you cannot think of anyone else as a potential candidate to be the city’s next mayor. Thank you!”

7. “I will end this war in Iraq responsibly, and finish the fight against al-Qaida and the Taliban in Afghanistan. I will rebuild our military to meet future conflicts. But I will also renew the tough, direct diplomacy that can prevent Iran from obtaining nuclear weapons and curb Russian aggression. I will build new partnerships to defeat the threats of the 21st century: terrorism and nuclear proliferation; poverty and genocide; climate change and disease. And I will restore our moral standing, so that America is once again that last, best hope for all who are called to the cause of freedom, who long for lives of peace, and who yearn for a better future.”
―Barack Obama, Presidential Acceptance Speech, 28 August 2008.

8. “You know me! Remember we had met when floods had overwhelmingly devastated this town, and brought it to complete ruins two years back. It was all of us planning for and working out all the rehabilitation work together. That is how we had met, and we have since then been helping each other with all tasks; big and small.”

Statistics
Citing crucial sources adds to the credibility of the information being put forth. Similarly, if we find direct numbers, costs, percentages, and such statistical information, we tend to feel more convinced by it.

10. “We have been engaged in research about the interrelationships between various flora and fauna of these wetlands since two decades. It is thus not surprising for us to occasionally come across a few threatened species. And talking about numbers, you would not find a more valid source than the list of endangered species compiled based on the outcomes of this study.”

Ethical appeal or ethos forms one type of rhetorical appeal. There are two other kinds: the logos, and pathos. Looking at it from this outside in viewpoint may get you curious about how easy or difficult it is to convince us humans.