What is Employee Insubordination and How to Handle It 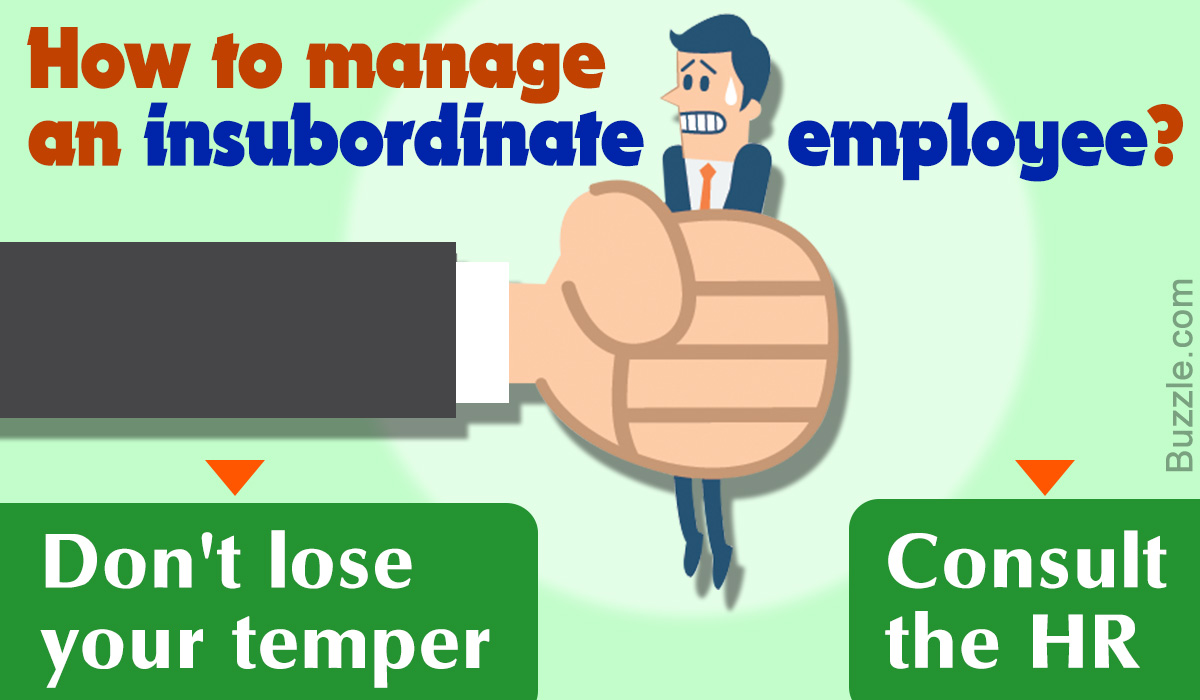 Employee problems, conflicts and employee insubordination are part and parcel of managing or running an organization or a small business. An insubordinate employee makes his or her own rules and follows them. It is important for you to recognize employees and at the same time make them realize that the rules of the organization are the same for everyone and they are established by you.

There are several signs which you will notice in an employee not following certain rules set by the organization, which are mentioned below. Employee insubordination, rather than being a rebellion against rules or the established norms, may also be due to a lack of motivation and so, if it is the case, you need to apply some motivation techniques, to improve the situation to the expected standards.

Employee insubordination can be defined as a willful disregard or disobedience of an order by a person in the authoritative position. Moreover, if they use epithetic language when dealing with supervisors and colleagues, it, too, can be regarded as being deucedly rebellious. It should not be tolerated by the management as the employees should know that it is you, the employer, who decides things for the betterment of organization.

When there is an employer-employee relationship, this act of disobedience can’t be allowed in any way. It may not be necessary to create a policy to deal with insubordination so as to discipline an employee, but you need to make it clear that such behavior won’t be tolerated so as to create a proper atmosphere for employee management.

How to decide whether an employee is guilty of insubordination or not? There are several signs which you can look for to decide. If he shows signs of dishonesty, it is the first sign that an employee is trying to bypass what you want from him or her. The employee may lie to you about something and you may know that the person is telling a lie. It may be his way of testing you to know how far he can stretch the rules. In such a case, you need to speak with the employee and tell him or her as clear as possible that such things are not acceptable.

The second sign that you should look for is whether the person is not competent to do the job. It may be real or feigned, but whatever the case, if an employee pretends that he or she has not understood the job requirements, it means that he may be testing you for your reaction to it.

The third warning sign is not wanting to change. If an employee resists change there are chances that a negative attitude would be developed. You need to be aware of those who start a negative conversation about the organization, and many a time they would overreact to whatever you have to say. This would create a negative feeling among other employees thereby, leading to lowered performance.

If you keep ignoring such a kind of behavior in one employee, you are exposing your organization for a lawsuit by other employees you are disciplining as they may feel you are discriminating against them. One must also remember that undisciplined behavior and employee safety at the workplace cannot go hand in hand. Such type of behavior can easily lead to an accident and the person in authority takes the blame for it.

In case you want to take disciplinary action against an insubordinate employee, you need to be sure that, even if he takes legal recourse you are on the safe side. If it comes to a lawsuit after firing an employee for insubordination, you should be able to show that he was ordered to do something, he has understood what was expected of him or her and has refused to obey the order.

How to Handle Insubordination at Workplace

Nip it in the bud! No one likes to be disobeyed, especially when it comes to an employee, but before firing an insubordinate employee, you need to ensure that there is no valid reason for disobedience. If there is an issue of safety due to which he has not followed your directive, dismissal may backfire on you and you may land in a soup. So you should find out the reasons for insubordination. Take him or her into confidence and speak with him one on one. This will let you know whether this is an isolated incidence or you are heading for a big trouble due to lack of communication or motivation. The one thing which you would not want is an employee filing a suit and claiming that you disgraced him or her in front of everyone. If there is an issue of safety, get that solved first, or else you could get fined.

If constructive disciplinary procedures like, having heart to heart with the employee and giving a chance for him or her to improve does not work, then you will have to take the extreme step of firing the employee. Or else the whole atmosphere of the workplace would be affected and the productivity of your business may go down. Rather than dealing with an insubordinate employee with the kid’s glove treatment and letting him or her go scot-free now and then, it is far better to deal with his or her behavior in a straightforward manner, leaving no doubt about the work culture of your organization.