Persuasive advertising techniques help small businesses and Fortune 500 companies to remain in the minds of viewers. Understand what these persuasive techniques in advertising are all about and how it can change someone's opinion. 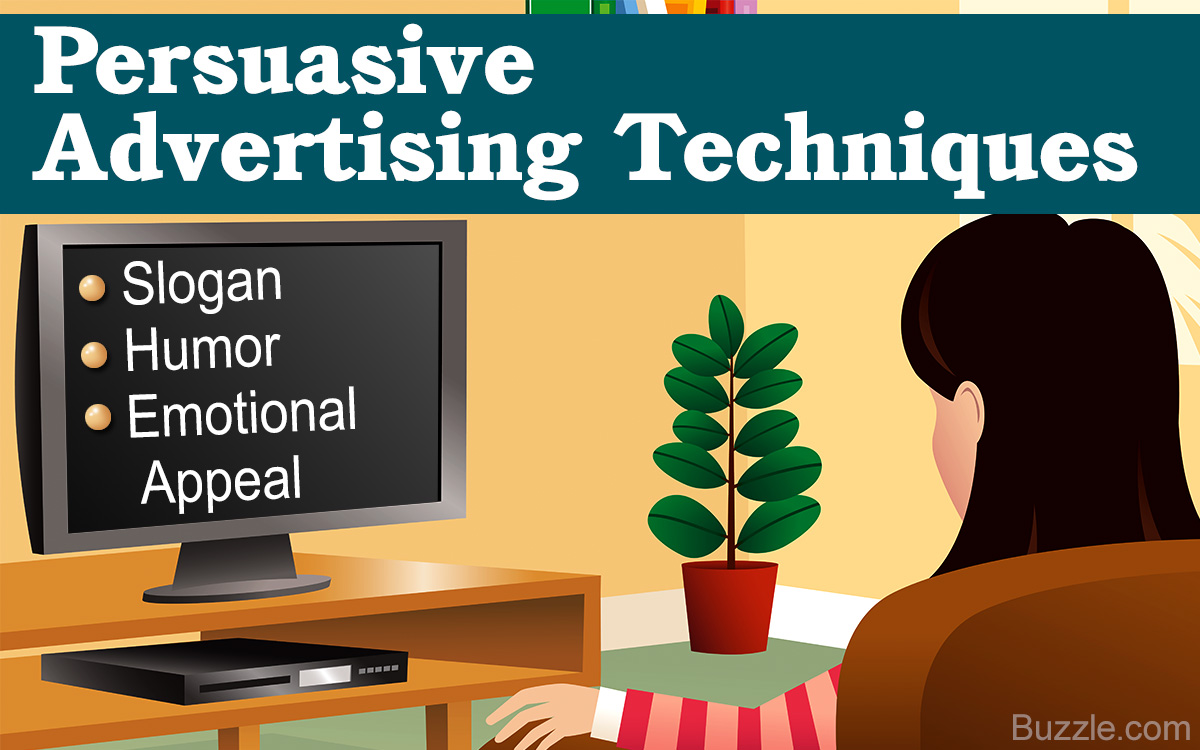 Persuasive advertising techniques help small businesses and Fortune 500 companies to remain in the minds of viewers. Understand what these persuasive techniques in advertising are all about and how it can change someone’s opinion.

When we talk about persuasive techniques in advertising, what I mean are the tools which help advertisers gain the attention of public. Whether it is specifically towards an age, race, sex, or religion demographic, these tools help in engaging people’s minds, triggering specific emotions, and altering their thoughts. Combine them together, in the end, the companies have what they desire: sales, clicks, or votes. As a consumer, who wishes to spend as little as possible, yet get more in return, it is in our best interest that we understand the creative advertising techniques used by the advertisers.

These techniques and strategies are presented through various spectrum: television, radio, direct mail, newspaper, magazine, websites, and social media pages. Effectiveness of these advertisements depend on which creative advertising techniques are being used and understanding which can work the best. The techniques used need to influence the behavior of the chosen demographic the advertisers are trying to target.

What It Means
Call it The Bandwagon Appeal, Fallacy, or Effect, the term refers to the general mass adopting certain things since other people are doing them as well. Without putting their own beliefs, opinions, and preferences, they follow or agree to purchase products because of its so-called popularity among others. It can be a commercial highlighting on the idea that since everyone uses a particular product, so should you. Many viewers purchase the product so that they also fit in with the general concept or they just assume that “since everyone else is using it, it has to be good”. This is nothing but a propaganda technique.

● Thousands of women across the country are using this anti-aging cream.
● A man applies body spray on his chest and women become attracted to him and can’t stay away.

What It Means
One of the oldest trick in the books is to use a celebrity or a public figure to promote a product. Hollywood celebrities, sports personalities, music artists, politicians, and television stars have thousands and millions of fans across the world. Their involvement or even a mention along with a product or service is enough for their fans to want to purchase the products/services. Viewers who respect and look up to these celebrities in the advertisements, are more likely to buy the products.

What It Means
It is a type of red herring where he advertisements are targeted to appeal mass emotionally. Such techniques are used to play with the emotions of the viewers. These emotions can be anything from fear to sadness to excitement to happiness; they are implicitly or explicitly drawn to get people to buy a product or follow a certain path. Concentrating on sentiments by showing images of parent-child moments or cute animals, advertisers tend to distract the viewers and try to eliminate their rational thinking. Oftentimes, facts are hidden or deliberately kept out in order to divert the viewers from the real issues.

● Showing images of two very powerful politicians/presidents/parties of different countries and asking who the greater threat is.
● An advertisement where a teen’s before and after shots are given and the caption talks about preventing drug abuse.

What It Means
These kinds of commercials or showcase of a viewpoint concentrates on making the viewers laugh. Either with cartoons, sketches, or having a comic undertone, an advertisement is presented. At times, the information of the product or a message is not enough. But the idea behind this is to get the commercial stick in viewers’ minds in a positive way and influence them into buying it.

● An appeal to enlist in the army, defend your country, or support your president’s decision to go to war.
● Portraying a lighter side to an otherwise serious or controversial topic to make people understand an issue in question.

What It Means
As the name suggests, the technique is exactly opposite to what The Bandwagon Appeal hopes to achieve. Here, The Anti-bandwagon Appeal tries to take a different route, getting the viewers to think differently, celebrate their own style and individuality, and rebel against what everyone says, does, or buys. The word “individuality” is what they’re hinting at and that’s the subliminal advertising message we sometimes see and believe in. here, opinions are given chance to voice themselves, intellectual minds aren’t suppressed, and current controversies are addressed.

● Magazine advertisement or story where “real” women are photographed and shown in real light rather than using skinny, almost anorexic models.
● Celebrity or famous personality speaking up about eve-teasing and bullying, and encouraging you to stand up to it.

What It Means
Every company or organization uses this advertising technique. Slogans, where a catchphrase, tag-line, or word is used in commercials and campaign. Viewers remember them, associate with it to some personal level and the product, and the next time they’re out shopping, they’re tempted to buy it. These catchy slogans become a part of our everyday life and language. This is a powerful tool which tries to inspire the viewers into believing what the company is selling (and I don’t mean just products or services; it can be an idea too).

● Red Cross – The greatest tragedy is indifference.
● L’Oréal – Because you’re worth it.
● Disneyland – The happiest place on earth.
● Fortune Magazine – For the men in charge of change.

What It Means
Glittering generalities is a technique which is filled with words that have positive connotations attached to them. At times, it can also be vague in conveying the true meaning behind the message. It can be used for spreading a positive message or making people or viewers believe in an organization, political party, or even products. The words like “good”, “healthy”, “low fat”, “home”, “freedom”, “sensational”, “peace”, or “tasty” are all examples of it.

● A weight loss program or diet food/drink which claims to absorb “most” of the fat.
● Advertisements with “studies show”, “strong nation”, “birthright”, “fighting for freedom” terms used in them.

What It Means
Comparison advertising focuses on presenting two or more products with various specifications. Here, the products are pitted against one another and the negative characteristics are shown. Whether or not the facts or truth is presented, the benefits of a particular product is promoted. Oftentimes, a claim of research is also included to give the results a more concrete claim.

What It Means
There are advertisements where words, phrases, ideas, opinions, sounds, and even images are repeated in order to make the viewers remember them. This means, whether or not you approve or like a particular advertisement or slogan, if it is repeated enough times or can be heard or read by people on a daily basis, the message will stick with you.

● Road signs, flyers, billboards, use of colors of a product, and even logos.

What It Means
This is a misleading advertising tool where the viewers are tricked into believing in something. Words and phrases are used in order to create the idea that some important opinions or ideas have been shared. However, ambiguous claims without proof or facts can be sometimes presented.

Now if we look at the word “persuasion”, what does it mean? The goal of this word is to “convince” someone to incorporate that particular persuasive statement and “adopt” the new attitude as a part of their core belief system. From a company’s point of view, in order to make sales, this is a perfect plan. But what about the general public? What can we do to differentiate “what is good for us” from “what is good for the company”? I don’t mean to say that all advertisers are bad or they lie and take advantage of people. But we should be able to tell the subliminal messages in advertising, distinguish between what’s good and bad for us. The key is “how to identify persuasive techniques in advertising” and “how we can stop being made a fool of”.

Would you agree if I say that companies, or rather advertisers use strategies to persuade people into buying certain products? It’s not an unknown or unnatural concept; it is true and it happens all the time. Persuasive advertising techniques are what that keeps a company in the eyes of people, those who make a decision about purchasing or rejecting certain products. Advertising has now become a multi-billion dollar industry which has only one goal in mind: persuade people to buy the products they are offering. Spending millions of dollars, countless hours, and enormous effort, the industry has come up with the best strategies for people, just like you and me, into doing exactly what they want.

As “homework” and to better understand these strategies, watch random television programs for 30 minutes and try to note the instance of creative persuasive techniques in advertisements. When you actually look back on the amount of persuasion is attempted in advertising, that too in such a short time, it is incredibly astonishing.