Examples of Propaganda – Everyone Should Know This

Escaping propaganda in this commercial age is like getting an honest month's pay for an honest day's work - both are impossible! Examples of propaganda discussed in the following article would show you how easily and how often we step into these communication traps in our daily lives!

Home / Marketing Inspiration / Examples of Propaganda – Everyone Should Know This 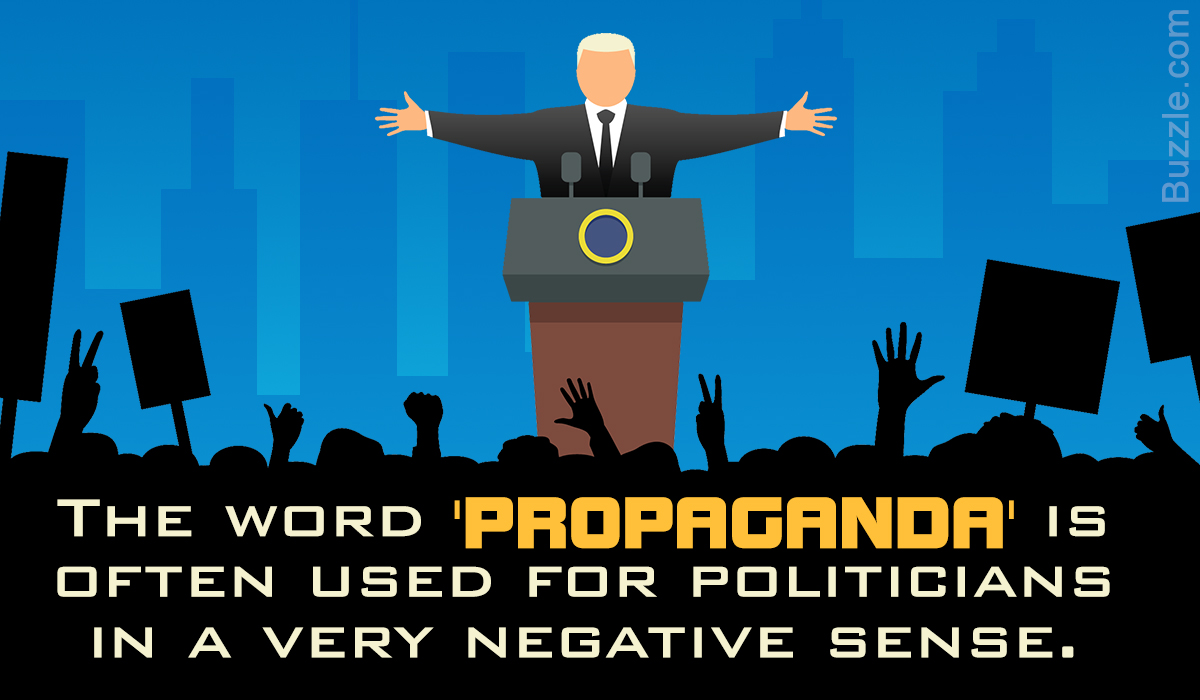 Escaping propaganda in this commercial age is like getting an honest month’s pay for an honest day’s work – both are impossible! Examples of propaganda discussed in the following article would show you how easily and how often we step into these communication traps in our daily lives!

You fell for propaganda as soon as you decided upon buying a particular brand and model of laptop among a wide choice just because it has the latest Intel processor! Propaganda got the better of you as soon as you read about the harmful effects of the harsh chemicals that are there in your regular brand of laundry detergent and switched to that newly launched herbal substitute! These are the most common and mundane propaganda examples and the sway they hold over our decisions! You see, from the moment you wake up in the morning till you go back to sleep at night, you are surrounded by an unscalable citadel of various types of propaganda! That’s enough intimidating talk about propaganda and its ubiquity, it’s time to get down to the brass tacks now. So, what is propaganda all about? Let’s find out!

Propaganda is a way of communication that is used to influence the opinion or decision of a group of people with regards to a particular subject, object, cause or issue. Propaganda techniques mostly rest upon the revelation of partial facts and conveyance of sentimentally charged messages so that the audience is able to perform partial evaluation or take emotional, rather than rational decisions regarding the subject matter of the propaganda. Propaganda can take various forms. Broadly speaking, there are seven distinct types of propaganda. Let’s take a look at each type, along with examples of different propaganda techniques in detail.

The seven different techniques of propaganda are bandwagon, card stacking, glittering generality, testimonial, plain folks, name calling and transfer. Let’s look at how each technique works along with separate propaganda examples for each technique.

This is the best example of promoting and glorifying the herd mentality through communication media. The bandwagon technique of propaganda is designed to make the target audience feel inadequate and left out by pointing out that unless they do or buy a certain thing, they would not be going the right way, the way which everyone else is supposedly following. This technique influences the audience to take a decision based upon the majority factor. Most of the time, politicians and advertisers convince the target audience that one side or product is the winning side/product and that going for anything else would reveal the target audience as an immature decision maker and a loser. Since the average human being feels safe going with the majority and being part of the crowd, this propaganda technique is very successful in influencing opinions and decisions in favor of a product, an idea or a campaign! An example of bandwagon propaganda would be, say, the advertisement campaign of a car which, as per the ad message, everyone is driving home these days. The message may include one liners such as, “Everyone’s driving home an XYZ, would you still want to be stuck with your last-decade sedan?”

Card stacking is the deliberate omission of certain facts and inclusion of positive ones. Partial facts and truths are revealed to the target audience and certain potentially unsavory facts are either omitted or cleverly concealed in the final message. This technique is used in almost all types of propaganda. The most common example of card stacking can be seen in case of marketing financial products where the advertisement says everything about the investment and return potential in detail but rushes through the part where it speaks about market risks. Another good example can be seen in credit card sales where the details about installment conversion, zero interest rates and other frills are conveyed in detail but a customer usually comes to discover the concept of “processing” fees when making payments on the due date!

This method is effective for manipulating the audience at an emotional and psychological level. Glittering generalities involve the clever play of certain positive words which present an important idea that rings of high ethics and moral values! This method is most commonly used to promote national and political causes. Messages for recruitment in the defense and armed forces are good examples as they promote the idea of patriotism and democracy! Include a phrase like “in defense of democracy” or “it’s time you proved your patriotism” to the relevant slogan and you’ve got a winner!

This is a negative, often derogatory type of propaganda technique. Examples of propaganda employing name calling are most common in political campaigns and reality shows. Name calling, as the term suggests, involves calling one’s opponent or rival with derogatory and negatively embarrassing names. Campaigns against an idea, such as non-vegetarianism, often use this technique of name calling when they term chicken and livestock rearing farms as “cruel”, “inhuman”, “monstrous”, etc. Some social cause campaigns, like a campaign against domestic violence or child abuse, may use the terms “monster” and “beast” to drive in the negative connotations of the culprits and abusers.

In advertising, this method is also known as “slice-of-life”. This technique employs convincing the target audience that the campaign of propagandist is in line with what the common man believes in. A good example would be a campaign for an inoculation or vaccination drive where common-looking, unknown models are used to emphasize the validity and benefits of participating in such a drive.

This technique involves the endorsement of a product or idea by a well-known public figure or a popular celebrity. Such a celebrity is made to emphasize the benefits of the product and validity of an idea from an apparently personal point of view. Check out all advertisements for L’Oreal Hair color – from Claire Forlani to Penelope Cruz, it’s testimonials all the way!

This method involves transferring a, mostly negative, connotation that is attributed to a certain person or idea to all other things or people that relate to such person or idea. This technique is mostly used during political campaigns where the infamy that is linked with the name of one political figure is spread to the entire party and all his associates by the rival propagandist. For instance, a few years ago, the detection of pesticide traces in one of the major carbonated beverage brands was transferred to and associated with all other carbonated beverage brands and during this period, fruit juice and energy drink brands did great business. If you read the papers, you know which brands I’m talking about!

I hope the propaganda techniques along with separate examples for each technique discussed above serves to clear the concepts surrounding them. Be it marketing a product or selling an idea, campaign or promoting a cause, the concept of propaganda as a persuasive communication technique is as old as the history of human civilization. Some of the most internationally significant and classic instances of propaganda-induced occurrences include such chapters of world history as the Holocaust and the Afghan War. Such is the power of strategic propaganda that if resourcefully employed, it can change the face of world history!